Narendra Damodardas Modi was born in a family of grocers on 17 September 1950 in Vadnagar, Mehsana district, Bombay State (now Gujarat) to a Gujarati Hindu couple Damodardas Mulchand Modi and Hiraben Modi. As a child he helped his father sell tea at railway stations and bus terminus. He was rhetoric in debates in school and was noted for the same. Since the age of 8 he has been attending shakhas of the Rashtriya Swayamsevak Sangh (RSS). It is here he met Bharatiya Jana Sangh leaders and his political interest grew. In a customary tradition, he was married to Jashodaben Chimanlal Modi, when they were 18 and 17 respectively. Soon he abandoned his bride and his house. The marriage was never consummated and considered void. For 2 years he travelled North and East India and visited many hindu ashrams and was very influenced by Swami Vivekananda and Ramakrishna Mission. He worked for his uncle in his canteen. Modi has a Master of Arts degree in political science.

In 1971, Modi joined a Jana Sangh satyagraha in Delhi led by Atal Bihari Vajpayee and this was his first political advance. Same year he was full time in RSS. During the state of emergency (1975-1977), he served as general secretary of the "Gujarat Lok Sangharsh Samiti" which is an RSS committee opposing the Emergency in Gujarat. Till 1985, he was working for RSS in Gujarat and Delhi and then he started working for BJP. Later in 1987, at the BJP's Gujarat he served as organizing secretary. By 1990 he was a well known BJP member. He worked for BJP's National Election Committee, Ram Rath Yatra and Ekta Yatra (Journey for Unity). In 1994, he served as the party secretaryand his electoral strategy got victory to the BJP in the 1995 state assembly elections. Soon he was promoted to be BJP national secretary at Delhi and after the 1998 election victory he was made BJP general secretary.

After the government failed to handle the Bhoj earthquake, Modi was chosen to replace the then chief minister and sworn in as Chief Minister on 7 October 2001. He won the 2002 by-election and entered the Gujarat state legislature. Godhra riots happened during his period and his government handled it well. Soon he offered his resignation and called for re-election in December 2002. He won this election with clear majority and swore in for a second term as Chief Minister on 22 December 2002. He made policies to reduce corruption and also supported privatization and small government. He was elected as chief minister for the 3rd time in 2007 and the 4th time in the 2012 Gujarat Legislative Assembly elections. After the 2014 general elections, he resigned as chief minister and MLA to become the Prime minister of India.

Narendra Modi was sworn in as the Prime Minister of India on 26 May 2014 after the BJP led NDA won a landslide in the 2014 Lok Sabha election. Modi is the first Indian Prime Minister born after India's independence. Again after the 2019 Lok Sabha elections, Modi started his second term as BJP led NDA won. Modi is the longest serving Non-Congress Prime Minister as of 2021 and the 4th longest serving Prime Minister of India. Modi has brought in many reforms and repealed hundreds of obsolete laws in his tenure which no other PM did. He started many programs/campaigns like Digital India, Ujjwala scheme, Foreign Direct Investment, Sarva Shiksha Abhiyan, Make In India, GST, Swachh Bharat Mission, Ayushman Bharat Yojana, Uniform Civil Code, Yoga Day and many more. His demonetization move was a major blow for Black money holders. The way he and his government handled the COVID-19 situations in the country with complete lockdown is appreciated by the world. The vaccination drive in India is most successful compared to the rest of the world. He hosts the Mann Ki Baat monthly radio programme, on All India Radio. He has also conducted a discussion for students and the issues they face in examinations and was called Pariksha Pe Charcha.

Here are some inspirational Quotes by Narendra Modi to motivate the youths of the Nation. 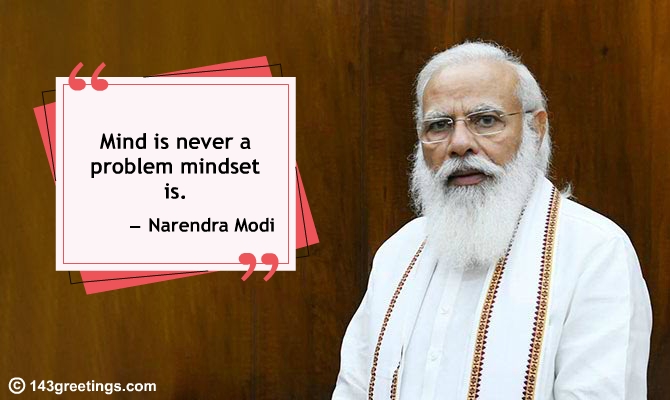 These quotes - the precious words by honorable Prime Minister of India, Narendra Modi will definitely enlighten you and inspire you. His thoughts and life coach us on the importance of development and technology for the prosperity of a country and its citizens. Narendra Modi is active all day and is a very hard working person. Even at age of 71, he sleeps only for 5 hours a day and makes sure that he completes maximum tasks in a day. He inspires youth to work without wasting time.

Every citizen should harness their potential to achieve their goals.  Narendra Modi’s approach for India is very progressive. Share these quotes with your friends, family, colleagues and well wishers and motivate them to do the best.